February 3rd, as a part of the World Interfaith Harmony Week hosted by the United Nations, Mrs Masami Saionji was invited to speak at a panel of special guests. This year, the Interfaith Harmony focused on ‘Implementing the Transformative Agenda of the Sustainable Development Goals’.

In her speech at the opening New Year ceremony at Fuji Sanctuary last month, Masami Saionji spoke extensively about the role that women must come to play in all aspects of life, while urgently calling for that role to become a lot more prevalent if we are to manifest a peaceful harmonious and loving society.

In her speech at the UN, she emphasized that point even more strongly and shared about her personal engagement in that area with the recent creation of a group called Soul of Women Global Network which she is spearheading.
She took that opportunity to also introduce a project for a campaign of the same name, that will be inaugurated on May 15th during the Fuji celebration of Symphony of Peace Prayers and the one year anniversary of the launch of the Fuji Declaration. 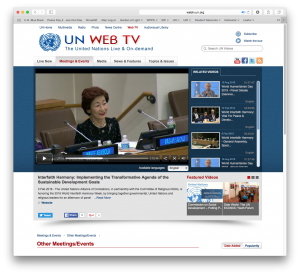 You may listen to that most inspiring speech at the UN, that brought her a resounding round of applause at the UN WEB TV website (speech starting from 1hr 21min) or at the YouTube.