The ceremony was split in two parts, with first the recitation of all the prayer texts and the various declarations which affirm the divine essence of the Self in every being, regardless; the prayers of Gratitude and 49 Words of Light. All declarations and recitations were accompanied by the appropriate IN (Mudra), perfectly performed by the thousands of people assembled, a grand display of beautiful harmony, emanating love, light and peace to the Earth and humanity.

In this energy field well prepared and after a short pause, the second part of the program started. The participants were encouraged to rid themselves of thoughts and emotions they held on, in order to transmute these energies into light, while acknowledging their original non dual form, at the Source.

“Originally, dualism does not exist. However sinful and evil an action or incident may appear to be, at its origins it is a necessary process in order to manifest ‘Ware Soku Kami Nari – I am a Divine Being’. Whatever phenomenon or thought is perfect, faultless, and accomplished, they are the steps of evolution and self-creation toward our destination – awakening to our own divinity.” 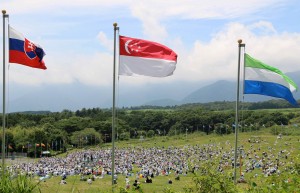 While soft music was being played, people were given time to reflect and look deep within themselves to debunk all these thought forms still present, holding them back, past present and future, judgement, incompetency, regrets, unable to forgive the past, as well fears, anxieties about the present thus the future!
And anything that denies the True Self to shine, to walk with the confidence that all is absolutely perfect, nothing is lacking, to express the Shinjin, Divine Being, to emanate that light to the world around.

Reflecting, writing these words and voicing them, with these 3 steps, these lingering thoughts being expressed blended with the high energy of the sanctuary, the air particles, transforming them into light. A big work with and on behalf of humanity took place.

Mrs. Saionji closed the ceremony with an uplifting speech in which she announced that at last, the door to a yet higher dimensional realm of vibrations had been opened at the sanctuary, saluted by applause and hugs, she concluded with a message so relevant today, may it resonate to every corner of the planet.

“What is most important is to believe in yourself. If you cannot believe in yourself, you can never believe in others. If you acknowledge evil in the other and fear him, it means you still have a little bit of evil in yourself. If you have truly become light itself, you can see divinity in the other’s depth regardless. Seeing this inner light is the first step to the awakening to human divinity. Whatever person the other may be, let us consciously and infinitely see his, her divinity with our eyes and hear his, her divinity with our ears.”

Infinite gratitude for the light that flew all over the sanctuary and afar. Though accumulated thoughts and emotions may still bring events to the surface, so they may be cleared, we thank the large body of Light that is working actively together with all of us, easing the process of transformation to an awakening of the Divine Spark, alive today and illuminating the new Earth.

May Peace Prevail on Earth