From April 26-28, Byakko Chairperson Masami Saionji and Vice Chairperson Rika Saionji took part in the “4.27 DMZ International Peace Conference” in Cheorwon, South Korea, which borders the Korean Demilitarized Zone (DMZ). The conference marked one year since the 2018 inter-Korean summit, where South Korean President Moon Jae-in and North Korean leader Kim Jong-un shook hands and made a historic declaration of peace at the DMZ.

The conference had three main purposes: (1) to encourage people to participate and take on various roles for the establishment of peace on the Korean Peninsula, (2) to help shape international public opinion for the success of international political negotiations, and (3) to vitalize academic discussions for the peaceful development of the Gangwon-do DMZ peace area. 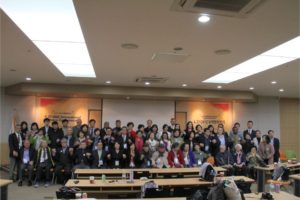 On April 26, the conference opened at the Cheorwan DMZ Peace Culture Plaza, with a keynote address from Max Ediger (international peace campaigner and former director of the School of Peace in Asia) and a discussion of the “People’s Peace Movement.” In the afternoon, participants had the opportunity to hear about the international “Women Crossing the DMZ” movement from Founder and International Director Christine Ahn, as well as about the “DMZ People’s Peace Chain” that would be taking place the following day.

At a dinner reception that evening, Masami Saionji had the opportunity to say a few words of greeting and deliver a brief message to the participants. Her words were very well received, and participants remarked that she came across as a very humble and noble individual. Later, Rika Saionji spoke about the prayer May peace prevail on Earth and the peace pole movement. She also presented small peace poles and peace dolls to all the participants.

The next day, April 27, the conference shifted into a peace walk and vigil, entitled “Hand in Hand.” It was organized by Dr. Peter Jiseok Jung, Director of the Border Peace School in Cheorwon, who was a guest speaker at the 2017 Symphony of Peace Prayers at Fuji Sanctuary. In his quest for peace on the Korean peninsula, and to follow up on last year’s historic summit, Dr. Jung envisioned an event in which people would join hands in peace along the border of North and South Korea.

Altogether, some 200,000 people gathered at the DMZ to join hands for peace. They included students from elementary school through university, educators, religious leaders, homemakers, local residents, and many others. The event began with music and dance performances by students, expressing their wishes for peace and unity. This was followed by a Christian ceremony. Next, small national flags brought from Fuji Sanctuary were handed out to some of the participants, who then climbed to the top of Soi Mountain—about a forty-minute journey. Masami Saionji joined in this peace walk. Other participants joined hands from east to west along the border of the DMZ.

The day’s events were widely covered by local media, including newspapers and TV news. Masami Saionji gave an interview to a local TV station and took photos with participants at a peace pole that is planted at the top of the mountain. Photos and videos from the day can be viewed on the event’s Facebook page (in Korean), via the following link: bit.ly/4-27-dmz. 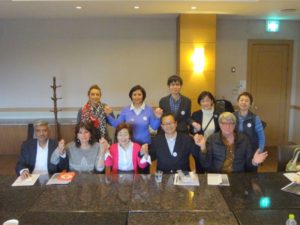 On April 28, a meeting was held at the Border Peace School, in which Masami and Rika Saionji talked with a small group of participants from various countries. These included Dr. Jung and Max Edigar, who gave the keynote address two days earlier, as well as participants who had come from Israel, Palestine, and India at Masami’s invitation.

They discussed the importance of each individual’s consciousness in bringing peace to areas of conflict. Masami remarked that the root of the problem lies not with governments or religions, but in our habit of thinking and speaking negatively of ourselves, treating ourselves as powerless. We have come to rely on leaders and experts, handing our innate power and ability over to them, she said, and rather than focusing on the past, we need to turn our consciousness toward the future we want to create, just as Dr. Jung did with this event.

Dr. Jung thanked everyone for their support in making his vision a reality, after which Ms. Katzil Mazal from Israel offered her impressions. She expressed her wish for the peace and harmony of not only herself and her family, but of all people on earth. For this reason, she plans to share her experience of this “Hand-in-Hand” event with people back home, in the hope that it can help to bring peace between Israelis and Palestinians. Mr. Wadhwa Krishan Kumar, the guest from India, said that he would like to hold a similar event on the India-Pakistan border as well, to promote peace between those two countries. All participants agreed that they would like to see “Hand-in-Hand” spread around the world, as a way for individual citizens to create peace in the world.