The Life of Masahisa Goi
Masahisa Goi was born on November 22, 1916 in Tokyo, Japan. He was one of nine children and although physically fragile, he was ambitious as a child and recalls at the age of three being concerned with his future career. He loved the arts and was especially fond of literature and music, and dreamed of becoming a teacher or writer. Born into a family of simple means, he worked his way through school, and despite various challenging circumstances, he was always cheerful and optimistic.

However, due to his strenuous work schedule and his fragile physical condition, he began to experience health problems which led him to various esoteric studies in spiritual healing, yoga, the martial arts, and the pursuit of various spiritual practices which included long hours of meditation. During World War II, Masahisa Goi was working at a manufacturing plant conducting cultural activities which included organizing a choir, publishing a factory magazine, and other festive events.

The end of the war brought a great turning point in his spiritual development, and he gradually became involved in religious studies. He left his occupation to devote himself completely to healing work, always refusing to receive money for his services, and wishing only to be of service to humanity and praying toward that aim. 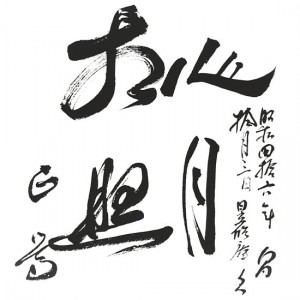 His fervent prayers were eventually answered through a heavenly call asking for his readiness to commit himself to God. He responded without hesitation, although it was sometime later that the true meaning behind this calling was revealed to him.

He later understood that the various roles and situations he found himself in were for him to experience the many struggles and hardships of humanity in post-war Japan. Moreover, each experience helped him deepen his spiritual quest. During that period, he also came to realize that his healing work only cured people’s illnesses, but did little for the development of their inner spiritual selves. He realized that in order to reach out to people with words of truth, an easy-to-practice spiritual discipline must be made available to them.

Thereafter, he continuously pursued his own spiritual training until he received a series of rigorous tasks through the guidance of his guardian divinities. These included a three-month period during which he underwent painstaking training in ceasing all conscious thoughts.

At the age of 33, Masahisa Goi completed his training and attained oneness with his divine self. From that moment on, he set the foundations for his work for world peace. He received the universal prayer and message May Peace Prevail on Earth, and began giving spiritual counseling and guidance in the Tokyo area. His all-encompassing love, his spiritual insight, and his light-giving power were so strong that it was not unusual for him to see several hundred people in one day.

In 1955, he initiated an international movement of prayer for world peace, which has since spread throughout the world to people of all ages, faiths, and walks of life. This movement, centered around the prayer May Peace Prevail on Earth, continues under the leadership of Masahisa Goi’s adoptive daughter, Mrs. Masami Saionji, who trained with him for ten years.

Seven years prior to his passing in August 1980, Goi Sensei, as he was known, entered a meditative state of perpetual prayer in his home in Ichikawa, Japan. (Sensei is the Japanese word for ‘teacher’ or ‘master.’)

For a more detailed account of Masahisa Goi’s early life, please see his autobiography, One Who Unites Heaven and Earth.

From those who met him
Most of the people who had an opportunity to meet Masahisa Goi were Japanese. Their descriptions of him have been summed up in the following way:

A profound, warm love and light seemed to fill the room, reaching people instantly. He had a great ability to listen patiently and never admonish anyone. Masahisa Goi could instantly see a person’s circumstances, and everyone who was counseled by him reported feeling light and refreshed afterward, as if a huge burden was lifted. His smile was very healing, and although his lectures could be poignant, everyone remembers Masahisa Goi as a person who loved to laugh, with a genuine sense of humor, and a passion for accomplishing his mission for world peace.

When Masahisa Goi arrived in New York, dressed in Western clothing, I remember that although he had a small frame, his presence engulfed the whole room and his smile was overwhelming. I really hardly knew what was actually happening then, but I felt this incredible energy fill the room and experienced an overwhelming feeling as if I was home. Although I did not know about the peace movement then, I knew this was an incredible being whose presence was gigantic. His warmth, light, harmony, encouragement and laughter were incredible, a power I had never experienced.
– Pamela B., Connecticut, USA